At the Intersection of Culture and Blindness

Our Senior IMPACT Project manager Priscilla Yeung grew up feeling invisible. She shied away from public speaking and sharing her personal story, especially as her vision declined. This year, she found the courage to begin talking to the broader community about the challenges of being a blind woman who is Asian American Pacific Islander (AAPI).

It all started with a video. Priscilla was invited to participate in a campaign with Disability Rights California to talk about the issues faced by women who are AAPI and have various disabilities. She was intrigued at the chance to meet these women who uniquely understood challenges she has faced, but it meant being willing to be on video. She decided to say yes.

“It was really eye opening for me,” Priscilla said. “Some of the women were deaf, some in wheelchairs, some deaf and blind. I had not worked with other women with this interesting cross-section of being Asian and having a disability. I learned that even though we all had different disabilities, we had similar experiences. It was really validating.”

Together, the women discussed how AAPI culture tended to view disabilities unfavorably and with shame. They all had to relearn cultural norms such as feeling that they should stay hidden because of their disabilities. Priscilla was not immediately accepted into her husband’s family because she was blind. It took years of work to rebuild those relationships and take apart those stigmas and misconceptions. She hopes that as a culture, people who are AAPI will be willing to look at those stigmas and see that recognizing them is a positive first step.

“It’s about learning to exist in our cultural norms and family units while working to overcome some of these misconceptions, both inside ourselves and across our culture,” Priscilla said. “It really made me feel like I was part of something bigger than myself and I wasn’t alone anymore. I’m not the only Asian woman with a disability who is sharing my voice. Together, we can start to reshape these cultural views and begin this conversation.”

With the onset of the pandemic and a rise in hate crimes against people who are AAPI, Priscilla felt even more of a need to use her voice. She watched as members of Society for the Blind’s Asian American Support Group, which she helped create, became afraid to leave their homes.

“They had worked so hard to become mobile and comfortable with traveling despite vision loss,” Priscilla said. “Now they have stopped going out, and it’s not because of their vision loss. They’re afraid for their safety as people who are Asian. Some of the members aren’t even taking walks anymore.”

Priscilla says she also feels much more vulnerable being an Asian blind woman right now, always concerned about her safety because people have been taught to blame the pandemic on people who are AAPI. But she recognizes this as an opportunity before her and is taking steps to talk about her experiences. When she was asked to share her story of being blind and Asian at the National Federation of the Blind convention this year, she said yes. When United Way California Capital Region asked her to speak about her experience as an AAPI woman with a disability, she said yes. When Amtrak asked her to be part of a video about transportation for people with disabilities, she said yes. When ABC10 approached Society for the Blind about participating in a long-form news story about the anniversary of the Americans with Disabilities Act, she again said yes.

“I’m really shy and introverted, but I’ve learned to just say yes and figure it out later,” Priscilla said. “Because of the day and age we are living in, I’ve thought more about what all of this means to me and what my opportunities are to use my voice and not be so invisible.”

She says the graciousness and affirmation of the women she met shooting that first video gave her the courage to share her story and to hear other people’s stories. Through the Asian Support Group at Society for the Blind, Priscilla is listening and working with its members to overcome their cultural stigmas about their own disability. She helps them harness the qualities they pride themselves on being Asian American – resilience, flexibility and hard work – to carry them through their journey of vision loss into the life they want to live now, free of shame.

“That’s how we’re going to make change – by being open to listening and learning from each other,” Priscilla said. “It starts with a conversation or a small action within your culture. We have to meet each other in a point of grace.” 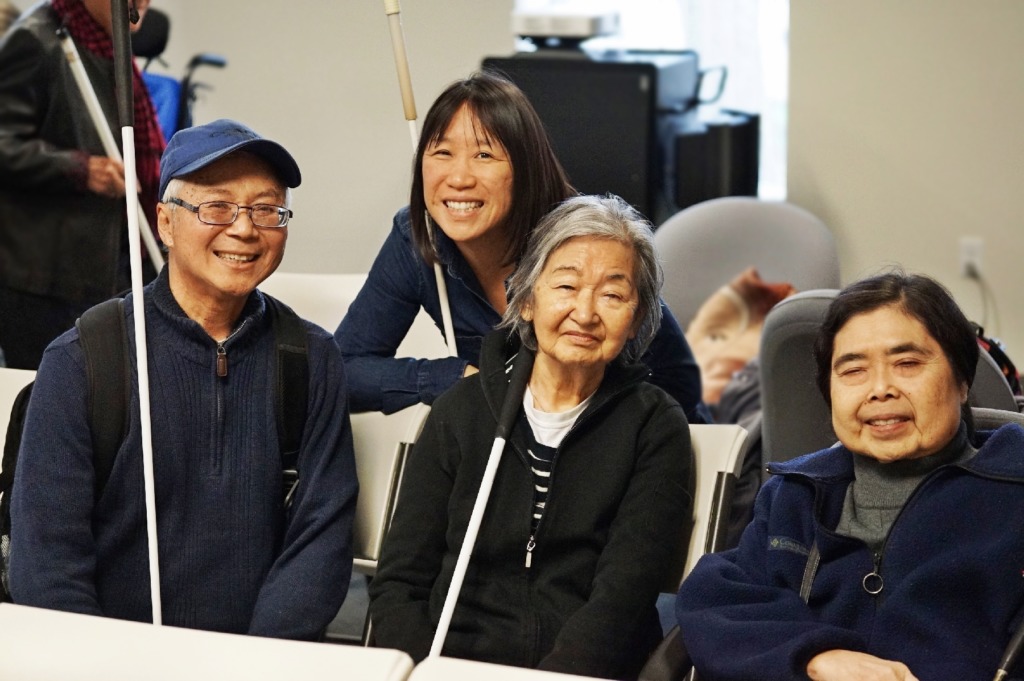