By the time Augustine Chukuma arrived in the United States from Nigeria, and became a citizen, he had already experienced so many blessings that he decided to legally change his name to Isimuka, which means “great fortune” in his parents’ language, Igbo. While he still mostly goes by the name Augie, the name Isimuka reminds him how fortunate he is to be where he is today.

“My life has been full of really unexpected circumstances,” Augie said. “What is the probability that you’re born in a third world country, go blind, and end up working for the State of California?”

Born in 1960, Augie began losing his eyesight at age 5 when he contracted German measles while living in Nigeria. He was almost fully blind by age 11. While his brothers and sister were going to school, he was being shuttled from doctor to doctor. When treatments were no longer working by age 7, his Catholic parents enrolled him in a residential school called Pacelli School for the Blind, which was run by the Catholic Sisters of Charity in Ireland. 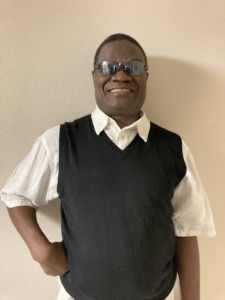 “It was a really nice school, and I learned a lot of different things there,” Augie said. “Even when I came to the United States, I kept in touch with the nuns from the school who had retired to Dublin by then.”

After attending International High School in Nigeria, he came to the United States for college on a scholarship he had won at age 9 after winning a national writing competition. He landed in Washington state at Walla Walla University to study computer science.

“It was tough for a totally blind person,” Augie said. “My grades started to decline and then my scholarship was messed up back in Nigeria. I came to California almost completely destitute and signed up with the Department of Rehabilitation so I could attend the Computer Technologies Program in Berkeley.”

Augie thrived in the program that was founded by a disabled IBM engineer. While attending the program, he taught at Vista College. When he graduated from CTP, he was named HP Student of the Year by his peers. He then went on to work in Kaiser Permanente’s data center in Walnut Creek for 20 years until they offshored his department in 2007 and he had to train his replacement.

“It turns out, being blind makes it tough as nails to get offered a job, especially in the programming world,” Augie said.

Unable to find work, Augie went on disability benefits. During that time, he and his longtime girlfriend who was still living in Nigeria decided to start a family. They had four children who mostly lived in Nigeria but would come to visit him. He moved to Sacramento and started looking to see if there were other blind people in the city. He searched the web and found Society for the Blind.

“I was shocked to find a whole valley of blind people,” Augie said. “I went through Society’s Senior IMPACT Project and began mentoring afterward. I got to meet more people here in the valley who are blind, and it felt really good. It kind of softened the blow of looking for a job and being denied.”

Augie knew that being an older, blind, Black man was working against him as he searched for employment. During one of the eight times he interviewed with the State of California, he was denied a job with the statement: “I simply don’t understand how you would be able to program without seeing the screen.”

In 2020, Augie’s four children were visiting when COVID-19 hit the world. He and their mother decided it was best for the children to stay with Augie in the United States. He became a single dad of four children, juggling distance learning and parenting while searching for employment.

Now at age 61, the Natomas resident is an avid runner, bicyclist, skier and keyboard player and proudly works in a highly regarded department at the State of California after being interviewed by a person who also was visually impaired.

“Despite the years of applying, I knew I would eventually work for the state because of the way my life had always gone,” Augie said. “I was in a civil war in Nigeria, for example, and the bullet just barely missed me. I’m very determined and I’ve had a lot of things happen for the better for me in my life. Now I’m working for one of the most prestigious departments in the state.”

He also is proud that his kids – now ages 11, 10, 7 and 4 – are thriving, despite their mom still living and working in Africa. He hopes to bring her to the United States soon.

“Being a single parent and having kids that absolutely depend on you is hard,” Augie said. “It’s also a good feeling because I know they are depending on me, even though they have their sight. I’m still giving them their life. They’re beautiful. I love my babies.”

Augie also is a founding member of Society for the Blind’s Black American Senior Support Group (BASS), which was formed in 2020 in the wake of George Floyd’s murder.

“As people who are Black and blind, we tend to feel out of place, but this group has filled that void for a lot of us,” Augie said. “It’s a really good thing, and I will continue to lend my support any way I can.”

He credits much of his attitude about life to the Irish nuns he met 50 years ago.

“If you give me a chance, I will not let you down,” Augie said. “I work very, very hard. As a blind person that has to fight so many odds, I have to run 10 miles so people will recognize that I have run five miles. But it reminds me that I still have abilities, and I’m ready to help others as much as I can. The nuns taught me that there’s more happiness in giving than there is in receiving. That’s how I live.”