Carol Rae Anapolsky has never been afraid to try new things. The 90-year-old Renaissance woman is a Sacramento native who opened and ran the largest gourmet chocolate shop on the West Coast, Kaylah le Chocolatier, until she and her husband retired to Oregon. In Oregon, she learned to fish and caught a 35-pounder. She learned to bead and began creating jewelry for galleries up the Oregon coast.

As her jewelry business was expanding, her beloved husband of 50 years, Sylvan, was declining from Parkinson’s disease. When he passed away in 2015, Carol returned to Sacramento to be near their son. Then she started noticing vision changes.

“I knew something wasn’t right,” Carol said. “I found myself in a closet and thought I was in a bathroom. When I was out with my walker, I seemed to be hitting poles that I didn’t see.”

After several medical appointments over two years, Carol arrived in our Low Vision Clinic and received an extensive eye exam from our ophthalmologist Dr. Cole, who diagnosed her with macular degeneration. She was legally blind.

“I remember looking at Sylvan’s picture and saying to him, ‘Okay, Sylvan, what are we going to do now? You’ve always said I was strong and could work things out.’ I know he said to me, ‘Well, work it out.’ He was a beautiful man. So I decided this wasn’t going to beat me, I was going to beat it,” Carol said.

Dr. Cole set Carol up with our occupational therapist Toni Boom, who helped arrange proper lighting in her home and helped the avid reader find the right Kindle so she could still read. The next year, her vision declined extensively, so Toni helped Carol advance up the waiting list for our Senior IMPACT Project so she could attend our less intensive five-day retreat.

“There were seven of us in the group, but only two of us with walkers,” Carol said. “Using a white cane is very different if you also have a walker. From that retreat, I learned everything I’m using today.”

Carol now knows tricks for making sure she doesn’t overfill her coffee cup or hurt herself in the kitchen – and she also met two new friends who she affectionately refers to as two of the Three Blind Mice. Together they dine in Sacramento, enjoy shows at Music Circus and are even planning a shopping trip in San Francisco and an Oktoberfest dinner at a restaurant in Sacramento. Now when she calls up a restaurant asking for a reservation for the Three Blind Mice, everyone knows who she is.

She also has become a Midtown fixture as she walks around town with her walker, white cane and beloved companion dog, Zoe, a Mini Maltese. Until her husband’s decline, Carol had been a dog owner since she was one day old. When her doctor recommended a dog to help with the grief of losing her husband and her vision, her twin grandchildren went online to help their Bubie find the perfect dog. Zoe even senses when Carol is about to have a seizure and helps her prevent it. 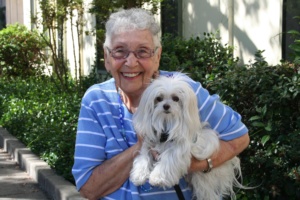 “My little girl is my best friend and such a good part of my life,” Carol said. “We go out walking and stop in all of the stores and coffeehouses to say hello. Not bad for a 90-year-old, right?”

When Carol celebrated her 90th birthday in August, she asked friends and family to skip the gifts and instead make a donation to Society for the Blind.

“I’m a strong believer in one thing – if I’m going to donate money, I believe in keeping it right in Sacramento,” Carol said. “And Society for the Blind is just a wonderful organization.”

Recently, with the help of the North State Assistive Technology Store at Society for the Blind, Carol has discovered a machine that helps her see the details on her beads again – so despite being legally blind, she will soon be back to creating jewelry.

With pride she points to her eyes with one hand and says, “I can beat this, and still do this,” as she then points to the colorful beaded necklace she’s wearing. With a twinkle in her eye, she says, “And I can add this to my bucket list.”