Debra was building and repairing communications equipment for the U.S. Army when she began losing her vision in her 40s due to myopic degeneration. What began with a minor episode in her right eye in 1982 eventually became a serious issue when she had an episode in her left eye. But she did not want to lose her job.

“I had to prove myself – if I couldn’t build it and sell it to the inspector, I couldn’t do my job,” Debra said. “I enjoyed what I was doing and the travel that came with it, so I had to build the equipment on my own to ensure I could still do my job.”

Despite laser surgeries, her vision declined, and she reluctantly decided to take a medical retirement from the military in 1993. She was hopeful that she could find a job with the State of California, but knew she would need more computer training, so she came to Society for the Blind while also working at JCPenney. Even though she was losing her vision, she never had a break in employment.

While taking computer classes at Society for the Blind, Debra was told by an instructor that they were adding a paid receptionist position and she should consider applying for it. She declined the opportunity.

“When I started losing my vision, I didn’t know what I could do,” Debra said. “I thought Society would train me for a job designed for someone who was blind. I didn’t know they provided training and tools for people to find employment of their choice.”

Once she realized that she was qualified for a wide variety of positions, she applied for the receptionist position along with a job at the state. She was offered both positions.

“Society told me that they understood I had wanted to work for the state, but they would like to offer me the job and that I could try it and see what I thought,” Debra said. “If I didn’t like it, there would be no hard feelings. So I accepted the receptionist position.” 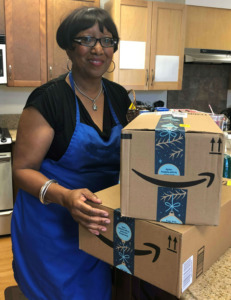 Debra became our beloved receptionist for nine years. She shared her own stories and experiences of navigating losing her vision and maintaining her independence. She knew they did not want to be a burden and were already feeling loss of independence from aging.

“I really loved being the receptionist,” Debra said. “I was meeting people who had been like me, suddenly losing their vision and scared and unsure of what to do. Now I had all this information to walk them through the process of getting involved with Department of Rehabilitation and how to advocate for themselves. It became a passion for me. People appreciated having someone working at the front desk who was blind.”

A few years ago, when an instructor position opened on our Senior IMPACT Project team, Society asked Debra to take the position. While she misses being that first voice on the phone for people who are losing their vision, she enjoys helping seniors gain the skills they need to stay independent.

“I like going out to our clients’ homes and speaking with them and giving them information,” Debra said.

She has not had another episode with her eyes since 1996. Thanks to advances in technology, she was able to trade in her coke bottle glasses for thinner lenses and frames. While she cannot read normal-size print, drive or see facial features, she can read some large print and see colors and shapes if they are less than six feet in front of her.

Because Debra is Black, a couple of our clients who are Black felt comfortable coming to her to ask if Society could start a support group specifically for Black seniors since we had support groups for seniors who spoke Spanish and who were Asian American.

“I’ll admit that at first I questioned if we really needed a Black senior support group,” Debra said.

Everything changed when George Floyd was killed. With a nation devastated and many organizations staying silent, Debra felt like the Black community at Society for the Blind needed a safe space to process their experiences with the intersection of vision loss and racism. She called many of the Black clients she had met and asked if they were interested. Most were.

Our Black American Senior Support Group, also known as BASS, was formed in summer 2020. The group has 10 to 12 loyal members that join the calls every two weeks.

“We’re addressing issues that the other groups don’t address, like the fears we all face being Black, blind and seniors,” Debra said. “It’s our reality and it’s what we live with. But this group helps us feel empowered. We’re a family and team that love each other.”

The group has people calling in from other states and has had guest speakers, including the ex-mayor of Oakland. Members share their experiences with being blind and Black and how they have dealt with it. Male members have shared how they are scared to use a cane for fear it will make them seem like an easy target and unable to defend themselves.

“In the last few years, people have felt more comfortable expressing racism and violence toward people who are Black,” Debra said. “If you’re blind and Black, you can’t see an attack coming and defend yourself. When I’m out walking, I wouldn’t see an attacker until it was too late.”

Debra feels like her years as a union rep helped prepare her to fight for her own needs and those of others who do not necessarily know how to advocate for themselves.

“Not everyone has that fight in them, so I often offer to write an email or make a phone call to help,” Debra said. “I just helped one of our clients who was not receiving the equipment she was entitled to with another organization. I feel empowered and they feel empowered. I couldn’t have done any of this without Society. If they hadn’t given me the tools and knowledge, I couldn’t give it to our clients.”