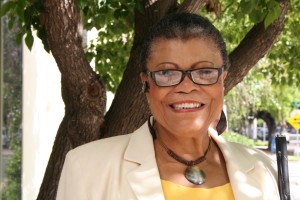 Ramona Herriford, 63, can still hear her dad telling her, “If you can read, you can do anything.”

So when her retinas hemorrhaged independently of one another, she thought her life was over. The self-employed insurance agent owned her home in Rosemont and had bills to pay, but could no longer see or drive.

“I was really, really scared,” she said. “But Society for the Blind let me know that life doesn’t stop. And I needed to hear that.”

Ramona’s journey through visual challenges began 10 years ago when she woke up one morning and opened her left eye to discover a large black circle floating in it. Her retina had hemorrhaged – blood had seeped into the center of her eye, and it would take two months before they knew it wasn’t cancer or a tumor. They eventually did surgery on her eye, but then it formed a cataract. She was stuck with vision in only one eye.

“You probably would think I’d be a little more concerned about only having vision in one eye, but my attitude was that I still had one eye, so I didn’t stop,” Ramona said.

Ramona continued to drive and even drove up and down the coast until four years later, in 2009, when she woke up to find a large black spot in her right eye, which could not be operated on. She had to wait six months for the blood to dissipate, which permanently damaged her retina. Doctors removed the cataract in her left eye but it only exposed how damaged the retina tissue was and the severity of the distortion in her eye. Sometimes she wishes they had not removed the cataract. With vision in both eyes distorted – she describes her vision like looking through a heat wave.

“I didn’t know what I was going to do,” Ramona said. “Because I’m self-employed, I don’t get state disability, and I already had financial challenges.”

“The Society helped me get over my anger and fear,” Ramona said. “I began rebuilding my business on public transportation, rain or shine. I knew I couldn’t stop. “

At Society for the Blind, Ramona was able to participate in several classes. She learned how to use a computer with assistive devices. She learned cane travel, especially how to decipher freeway noise from local sounds. She learned to listen before she even got to the intersection where she would cross a street.

Through Society’s Senior IMPACT Project for adults ages 55 and up, Ramona learned daily living skills: cooking, sewing and labeling using assistive devices like the Pen Friend that allowed her to record her own voice on the labels. Now she can make sure she grabs the right spices for cooking and the right shoes to go with a certain dress. She also was grateful for the group sessions where participants shared their techniques for dealing with vision challenges.

After that, Ramona signed up to become a Senior IMPACT Project mentor. She also volunteers in the Society for the Blind store that sells useful items and devices for people with low or no vision.

“When I would come to the classes or sit in the lobby, I saw so many people coming in angry,” she said. “I went through my own anger, and it was justified, but I wanted to encourage people about all that’s within them. They just have to make a choice to stick with it. It brings me joy to know I can still help people, even though I have low vision.”

Ramona is now a board member at Society for the Blind. She is a licensed insurance agent in the state of California through her business Herriford Insurance Services. She is a prayer chaplain at her church, Unity of Sacramento, and a volunteer with A Touch of Understanding – a nonprofit that teaches kids in schools about disabilities.

Thanks to her father’s encouragement years ago, Ramona even found a way to read. She uses software on her iPad that increases font size, and she has recording devices that read to her. She even reads books with a magnifying glass.

“I would not be where I am today if it weren’t for Society for the Blind,” Ramona said. “I probably wouldn’t have my business. I’d probably be sitting at home balled up in the fetal position crying. It would have been very easy for me to just lock myself in the house. But I made a choice. I chose to not allow my vision impairment to control me – I chose to control it instead. Besides, I’ve always loved a challenge.”