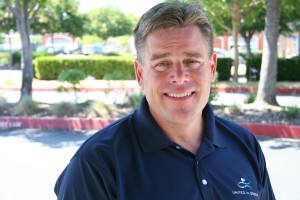 Richard Hunter was devastated when his dream of becoming a military officer died 10 months after he was commissioned as a second lieutenant in the United States Marine Corps. With one diagnosis of Retinitis Pigmentosa (RP) at age 22, he lost his dream, learned he would go blind and had no idea what path to choose next.

“That was a traumatic time for me,” Richard said. “All of my energy and focus was going into becoming an officer in the military. I got to where I wanted to be and then the rug was pulled out from underneath me.”

Two years later, Richard was in graduate school for a master’s degree and became a school psychologist in Winters for 10 years until his vision loss progressed and he was unable to administer the tests needed to diagnose learning disabilities. So he left a second career, but fortunately had discovered Society for the Blind.

“I never knew any blind people, so when I first went to Society for the Blind, I was blown away by the employees who were so competent with computers, had adventures, traveled, had professional and family lives – and they were happy,” Richard said. “It gave me hope.”

He became a volunteer for Society for the Blind, administering focus groups throughout Northern California and serving on the group’s consumer advisory committee.

Once he left his second career, Richard realized he needed to do something to model for his daughters that you could still set ambitious goals in the face of adversity. So after running the California International Marathon, he set a goal to qualify for the Boston Marathon in the visually impaired division – and he did. In 2007, he called the California International Marathon and asked them to add a visually impaired division – and they did.

Sports and physical activity became his new career. He made it his mission to recruit blind athletes to events, and in 2009, brokered a deal to bring the U.S. Association of Blind Athletes National Marathon Championships to the California International Marathon.

But in 2013, tragedy hit Richard again in the form of a bicycle versus car accident as he trained for an Iron Man competition in Lake Tahoe.

“I flew through the windshield and woke up inside the woman’s car,” he said. “My helmet broke in half, and I had broken my neck so I was flown to the hospital. I was lucky to be alive.”

Richard was in a neck brace for three months, but two months after it was removed, he ran the California International Marathon again, despite chronic pain. Four months after that, he ran the Boston Marathon again. Two months later, he and a guide swam from Alcatraz to the San Francisco Aquatic Park. And he continued his work to bring blind athletes together.

“Often people with vision loss don’t try athletics because they don’t want to ask someone to be their guide,” Richard said. “But most guides I’ve met have told me that they get so much out of the experience and love giving someone the chance to participate in a sport they otherwise would not have been able to do.”

In 2014, thanks to Richard’s work, the California International Marathon featured 45 visually impaired runners and 56 sighted guides. They asked him to create a Paralympic youth sports event that would run the same weekend, and he has partnered with Society for the Blind on the event for the last two years, bringing renowned blind athletes out to encourage the youth.

He received the 2014 Challenged Athlete Award from the Roadrunners Club of America for his athletic accomplishments and giving back to the physically challenged running community.

In 2015, the California International Marathon had 48 visually impaired and blind runners from 17 different U.S. states, as well as Japan and the United Kingdom, and more than 60 sighted guides. More than 30 blind youth took part in the Blind Youth Paralympic Sport Experience.

“I’m surrounded by people who have chosen to not have vision loss stand in the way of doing things,” Richard said. “People may not be running marathons, but if they see people like me testing our limits outside our comfort zone, they might be able to step outside their comfort zone and meet a friend for coffee or take Paratransit. I have a lot of respect for people who are able to take a risk wherever they’re at.”