Every summer, members of the two national blindness organizations gather at conventions that are part professional conference, part social gathering, and complete pandemonium. The National Federation of the Blind traditionally holds its convention in Orlando, Florida while the American Council for the Blind rotates their venue around the country. This year, I attended the ACB 2017 Convention in Sparks, Nevada, just outside of Reno. These events are usually a good place to get a feel for current trends in assistive technology and get a look at the latest in products with a blind or low vision audience in mind. 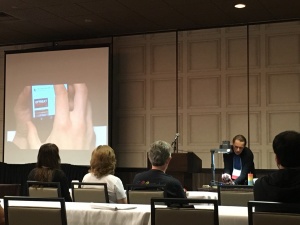 American Council for the Blind Conference 2017

While the CSUN conference, named for California State University Northridge where it was originally held, lays claim to the lion’s share of announcements of new products, it is primarily an industry event with registration fees to match. This means that the national conventions are typically the general public’s first opportunity to actually see, if perhaps just figuratively, the products as they come onto the market. What’s more, manufacturers tend to work hard to make sure that attendees not only have a chance to put their hands on new devices, but also walk away with examples as the first wave of sales are often delivered at the convention hall. Here are some of the devices on offer for the first time this convention season. 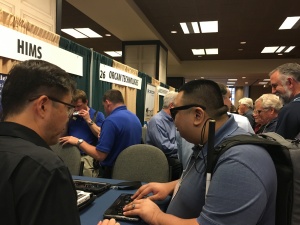 Aser visiting the vendor booths at the the ACB Conference

Braille notetakers are a unique technological solution usually targeted towards blind students and professionals that weds a small, portable computer with a refreshable Braille display. The HIMS Braille Sense was one of the later entries into the Braille notetaker market, after entries from Humanware and Freedom Scientific among others. This year, HIMS unveiled their latest offering, which abandons the antiquated Windows CE operating system in favor of a customized flavor of the Android OS found on most smartphones. Much lighter and thinner than its predecessor, this new unit dubbed the Polaris features 32 Braille cells and can act as a Braille display when paired with a computer or smartphone. To this end, it has extra keys for Control and Alt, the modifiers so often part of screen reader commands on Windows PCs. 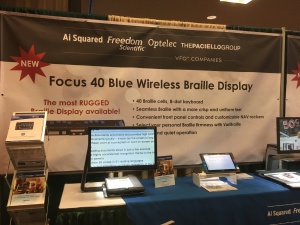 Vendor booth at the ACB Conference

Many products are more iterative than the Braille Sense. What was once Freedom Scientific, itself the product of a merger of several venerable assistive technology pioneers, is now a component of VFO Group. VFO has unveiled a new version of their Focus40 line of refreshable Braille displays. This new version comes in aircraft-grade aluminum and features a USBC connection for syncing and charging, Bluetooth pairing with up to five devices and a microSD card slot for reading of Braille formatted text files and saving of notes typed with the display’s Braille keyboard. This brings the device more in line with some of its leading competitors.

On the other end of the spectrum, there were far more modest devices entering the market such as the MicroSpeak voice recorder. This simple device has just six buttons. With voice prompts for battery level and spoken confirmation of file deletion, it’s an extremely blind-friendly device that is much simpler to operate than many other devices marketed to people with little or no vision.

Among the attendees and presenters this year were members of Google’s accessibility team, accessibility project managers embedded with the developers working on some of Google’s biggest projects. They provided information on some recent improvements to Google’s accessibility features for the visually impaired. These included seminars showcasing the new accessibility shortcut in the latest version of Android, and greater control over its select to speak feature. Other presentations showcased the functionality of Google Home, and apps in the Google Play ecosystem as well as new features in the Google Suite of web-based productivity apps.

One of the more surprising advances demonstrated was the newly rewritten screen reader found on Google’s line of Chromebook laptops named Google Vox. Running the Chrome OS, these lightweight and relatively inexpensive machines provide an optimized experience for anyone needing a streamlined web browsing and light productivity tool.

The national conventions are many things to many people. If your primary interest is in technology though, rest assured that the price of admission is more than worthwhile.