Society for the Blind Board Member Recovers from COVID, Saves a Man’s Life

Dr. Paul Peterson, one of our board members with vision loss, has been in the news in the past for his important work in the chiropractic field and his love for traveling. Now Dr. Peterson is back in the news for saving a man’s life after his own battle with COVID-19.

Dr. Peterson remembers sitting at a concert onboard a Princess Cruise ship in February – just two empty seats from a woman who coughed throughout the show. Three days after disembarking from the ship, Dr. Peterson began noticing odd chills, a low-grade fever and achy muscles. Certain he had the flu, he laid low – then the cough started. Within two days, he received a chest x-ray that revealed pneumonia. Two days after that, he received the dreaded email from Princess Cruise Lines: Passengers onboard his ship had come down with the coronavirus.

Dr. Peterson was the first person to be tested for COVID-19 in Sacramento: It was positive. He decided to recuperate at home, and his physician friend lent him an oxygen meter. On the twelfth day of the virus, his oxygen level was well below 100 at 84 despite using his CPAP machine, so he went to the emergency room. After several tests, he was admitted to the ICU.

“My wife asked if I was going to make it, and the doctors told her they didn’t know,” Dr. Peterson said. “It was quite the experience being wired to the wall and computers and not knowing if I was going to live or die.”

He was in ICU for two and a half days and in the hospital for five days. He spent the next two weeks recuperating at home. During that time, Sacramento County retested him to make sure the virus was gone: It was. As it turned out, Dr. Peterson was one of the few people in Sacramento who received pre- and post-tests for coronavirus – the practice was halted shortly after.

When Dr. Peterson’s physician friend learned that there was a new experimental test being done that involved using recovered COVID patients’ antibody-rich plasma to treat patients with severe cases of coronavirus, he called Dr. Peterson. The experiment required someone who had tested positive and had a subsequent negative test.

Dr. Peterson immediately agreed and became the first person in Sacramento to donate the antibody-rich plasma. He was featured on KCRA3 for what he calls “just laying there in a comfortable recliner while machines did the work.” He donated four units of plasma that day, enough for four COVID-19 patients.

Not long after, he learned that one of those units had saved a Sacramento man’s life. The man had been on a ventilator for 12 days and they did not think he would survive. Two days after receiving Dr. Peterson’s plasma, he was healing and able to talk to his family. Dr. Peterson is headed back to donate more plasma next week.

“It was a spectacularly wonderful feeling to know my plasma had saved someone’s life,” he said. “I wonder if perhaps my life was saved so that my plasma could save the lives of others. As soon as we have a strong antibody test, I hope even more people will donate. It’s easy to donate and doesn’t hurt a bit.”

Dr. Peterson has a new outlook on life since his experience in ICU.

“My whole life, I’ve thought of myself as a farm boy from Iowa and never indulged too much in things such as expensive food,” Dr. Peterson said. “Since being in ICU, if I want something, I get it!”

He also plans to continue traveling once the stay-at-home orders are lifted.

The beloved doctor offers this advice, “Keep your immune system tuned up through proper nutrition, rest, stress control and exercise, and you can fight off most things. The human body is self-regulating and self-healing and does a marvelous job of keeping us healthy.”

He adds, “If you come down with the coronavirus, please consider donating your plasma. This is a treatment we can offer now instead of just waiting who knows how long for a vaccine.” 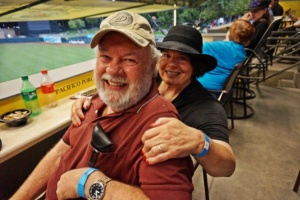