The Art of Independence: Meet Susan

Susan Hood was working on a degree in art history and a lifelong dance history project when a dental visit led to a staphylococcus blood infection that nearly killed her in 2017.

“I wasn’t expected to live, but I did,” Susan said.

After nine weeks in the hospital, Susan was alive, but the infection had damaged her mitral valve and caused 12 small strokes. She had open heart surgery to replace her mitral valve. She had to learn to walk again and lost much of her vision. After multiple eye surgeries, her vision improved slightly, but she still would need to learn to navigate her world very differently.

“Seeing through my left eye is like looking through a Coke bottle that has Vaseline smeared on it – I can see shapes, color and movement, but that’s all,” Susan said. “In my right eye, my central vision is completely gone.”

As she lay in her hospital bed in Hartford, Connecticut, she confessed to a friend that her biggest fear was losing her independence. She knew of no services for people with vision loss in Connecticut. With a little help from her brother in Galt, Susan moved herself across the country to the Arden-Arcade area of Sacramento on Christmas night 2017. In less than two months, she had signed up with the Department of Rehabilitation and entered Society for the Blind’s Senior IMPACT Project (SIP) retreat.

“With SIP, I started to feel confidence in the possibility of retaining my independence,” Susan said. “I was struck by the really warm, positive, upbeat approach of the facilitators and instructors. They took an interest in each of us and that really built my confidence.” 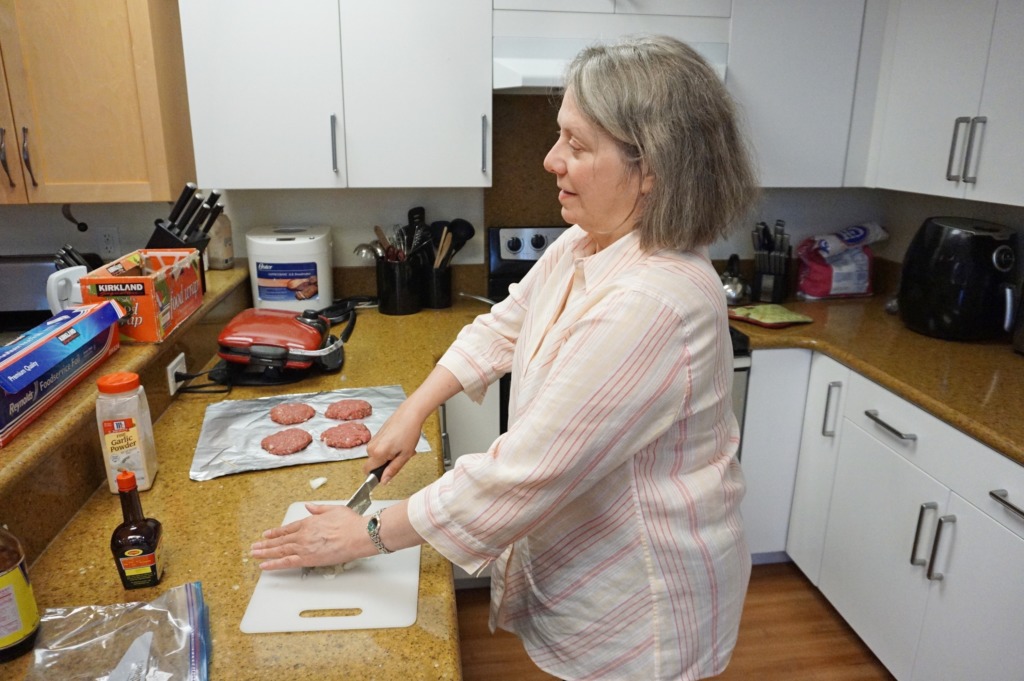 Susan graduated from SIP and became a mentor for the program. Just a few months later, she entered our Core classes determined to overcome her fear of cooking without sight.

“That got me over the hurdle,” Susan said. “I was so afraid of burning or cutting myself, and the heat was scary, but I got over that.”

She also learned orientation and mobility, Braille and how to use assistive technology, including a computer program that would allow her to continue to write in longform, tracking footnotes and citing sources. In April 2019, she was teamed up with her beloved guide dog, Geode, who is now 4 years old. She also participates in Society for the Blind’s writer workshops and yoga classes.

“My landing at Society for the Blind was extraordinary,” Susan said. “It was like taking a running jump into the pool and immediately swimming.”

Susan had managed to maintain her independence, but she was still navigating how to maintain her lifelong interest in art. She had previously worked as a freelance theatre critic and arts journalist for local Connecticut newspapers. Now she could no longer see details in paintings or dance movements.

She began asking for magnifiers and digital press kits when she went to museums, such as the Crocker Art Museum in Sacramento.

“My vision now depends on scale and contrast,” Susan said. “With magnifiers, I can get a general idea or look for certain details. With digital press kits, I can blow up wall text and labels.”

With dance, Susan relies on contrast and lighting. She can see silhouettes and some costume outlines. She has spoken with dance professionals in the area about providing audio narration and has been interviewed about what makes for good audio description of dance.

Thanks to the tools she learned at Society for the Blind, Susan continues to work on her lifelong dance history project and visit exhibitions and performances in Sacramento’s art community.

“I’m just really grateful that Society for the Blind exists,” Susan said. “Thanks to them, Sacramento is a really good place to be if you’re blind or visually impaired.”