Ana Zambrano of Folsom was just 15 when she was diagnosed with a rare autoimmune disorder – but when her kidneys failed in her early 20s and her blood pressure spiked, she unexpectedly found herself with detached retinas. 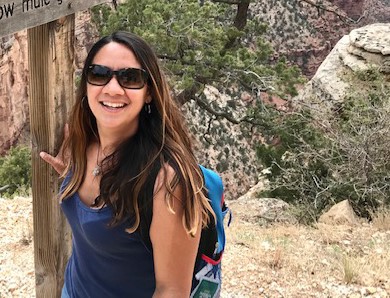 The mother of a 3-year-old boy endured dialysis three times a week for more than four years with no improvement in vision. Meanwhile, her husband at the time was spiraling into addiction. Eventually the marriage ended and Ana became a sick single mom with impaired vision while caring for a little boy. She had a kidney transplant, but her vision remained permanently damaged. Ana no longer had central vision, the rest of her vision was blurry, and she could not see contrast.

She and her son moved in with her mom and eventually Ana discovered a residential program in Colorado where she could learn how to live without vision.

“The more I learned about my situation, the more I felt in control,” Ana said. “I started my journey there.”

Leaving her son with her mother for almost a year, Ana developed the skills she needed to stay independent, including cane travel, daily living skills, assistive technology and more.

“The toughest part was accepting the fact that I was blind,” Ana said. “I was fighting it so badly that, rather than making progress, it was hindering my rehab. The interesting part is that when I accepted that fact, everything fell into place.”

“I was looking for employment and wasn’t getting anywhere,” Ana said. “I listened to a TED Talk about defining your fears rather than your strengths and goals. I realized I feared I was not the best tech person, so I signed up with Society for the Blind to get some additional skills.”

At Society for the Blind, Ana learned more assistive technology, including how to use screen reading programs and the Microsoft Suite. She also asked staff if they had any connections to people with vision loss working for the State of California, and she was quickly connected with them to talk about experiences and hurdles.

“I knew I needed people to talk to who had vision loss so I could learn how they found jobs and were successfully working,” Ana said. “I had been out of the workforce for a long time. It’s so important to talk to other people in the same boat because we’re all trying to reach the same goal to get people with disabilities employed.”

Within a couple months, she found a job in technical support with the State of California.

“I was very excited, but my first day jumping in, I came home and started crying,” Ana said. “My employer was so supportive, but everything was new and some of the accommodations I had requested weren’t correct. I’m grateful that Society for the Blind jumped in and helped me work with my department to get everything in place.”

Now 39 years old, Ana has worked for the State of California for six months helping people who are unemployed access benefits. She was hired when unemployment skyrocketed during the pandemic, so she considers it an honor to help people access their unemployment benefits.

“It’s going very, very well,” Ana said. “I’m now a mentor to another coworker. It’s fantastic and at the end of the day I’m tired, but it’s the good kind of tired. I feel like I’ve accomplished something. I feel valued as an individual that can contribute.”

Her oldest son is now 22 years old and her youngest is 11 years old. Ana still has some of the plates and spoons she purchased for her first apartment in Colorado to remind herself how far she has come.