Beyond the Magnifying Glass: Meet Nick 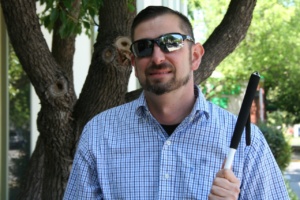 When Nick Westerman finally acknowledged he needed help with vision loss and came to Society for the Blind, he had no idea it would lead to a new career working there.

Nick was diagnosed with Stargardt disease, a juvenile form of macular degeneration, around 7 years old, but it took him nearly 30 years to start using adaptive technology – he had always gotten by with a magnifying glass.

“After coming to Society for the Blind, I realized there were a lot of products out there that might have changed my life earlier,” Nick said.

Growing up in Folsom, Nick refused to accept much help in school because he didn’t like the attention. He received his associate’s degree from American River College, but left the economics program at Sacramento State because it was too difficult to manage with his eyesight. He then spent 14 years in the family real estate business, but when his eyesight became more strained at age 36, he knew he needed some resources. He came to Society for the Blind for training and discovered the world of adaptive technology.

“I took to it fast and decided I wanted to go into it for a career,” Nick said.

“It’s really gratifying to be accepted as part of the organization that helped me find my path,” Nick said. “The people here at Society, from the top down, just attract and keep good people in every department. These are people who work for more than just their paycheck. This job will give me the chance to help other people experience what they are capable of as soon as they possibly can.”

Nick says screen-reading software and Audible have made the biggest difference in his life.

“I spent all of my life leaning over the computer and typing one-handed with a magnifying glass,” Nick said. “If I had used adaptive technology sooner I would have had more career opportunities at a younger age and been able to continue reading.”

In addition to adaptive technology courses, Nick also took Braille and living skills classes at Society for the Blind, which gave him the confidence to cook for himself.

“I used to put myself in a mental block – if it didn’t come out of a box, I wasn’t going to cook it,” Nick said. “I was afraid of burning or cutting myself. But last night, I was able to make pork chops with a sweet and spicy sauce. I love cooking for myself.”

Nick acknowledges that it took him reaching a certain maturity level before he could ask for help and he wants to help other people reach that point sooner.

“People have to come to that point on their own terms where they’re willing to accept guidance and advice, whether they have sight or not,” Nick said. “But once people come to Society for the Blind, I can show them how they can help themselves.”