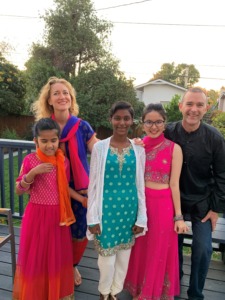 Because of her vision loss, Lisa Lloyd of Sunnyvale sees the world like a mosaic, so it is fitting that her household is filled with a beautiful array of people from around the globe. In fact, her home is nicknamed the International House of Light because she lives there with her Australian husband, Indian daughters and rotating international students from around the globe.

When Lisa and her husband, Gordon, decided to have children, she had already begun losing her vision to retinitis pigmentosa, better known as RP, an eye condition that had already affected 16 of her family members. Lisa feared passing along her genetic eye condition, so they chose to adopt.

After years of waiting, Gordon and Lisa went to pick up their 2-year-old adopted daughter, Anjali, from an orphanage in India. While there, they met another 2-year-old girl named Reshma who was blind. Her family could not care for her, so they had taken her to the orphanage. Her biological mother had been devastated to leave her, but she knew her daughter had no opportunity as a blind girl in India and would be better off adopted outside of the country. The orphanage asked Lisa’s advice on how to care for Reshma, and then Lisa and Gordon took Anjali back to the United States to start their life there.

When Lisa and Gordon decided to adopt a second child, they noticed Reshma was still waiting to be adopted. Minutes after reading that Reshma had leber congenital amaurosis (LCA) – essentially the childhood version of RP – Lisa received a call from an organization asking them to donate toward LCA research.

“We knew we were meant to have something to do with this child,” Lisa said. “We had even wanted twins, and these girls were just six weeks apart. Reading about Reshma’s eye condition and getting that call in the same 10 minutes clinched the deal. She was ours.”

When she came to live with them at age 5, they added the name Ana to her first name, which means “wanted,” so she would always know that she was wanted by both her biological and adoptive parents.

Ana Reshma is now 14 years old, and thanks to our CareersPLUS program going virtual, she was able to join the program last spring. Lisa says the weekly calls have helped her daughter see the many possibilities for people with vision loss.

“This has been such a wonderful opportunity for Ana Reshma,” Lisa said. “She’s jumped forward so much this year. I’ve seen her be pushed to contribute, to speak up and to stand up for herself. It’s broadened her horizons to think about what she can do in her life in terms of a career. CareersPLUS calls are a window to a world of what people who are blind are able to do.”

Because Lisa’s family is filled with people with vision loss who also have advanced degrees, Ana Reshma also has role models for success in her family. In fact, Lisa’s father is an attorney who continues to practice at age 80 while almost completely blind and partially deaf.

Ana Reshma also has speech apraxia, so her speech is not easily understood. On the CareersPLUS calls, she practices enunciating to be understood. She also has overall motor planning challenges, so Braille has been hard, but she is learning. She also is typing on a keyboard and using assistive software.

“It’s a battle to understand her needs, but it’s our job as her adoptive parents to keep opening doors every time one gets slammed until she can open it herself,” Lisa said.

Lisa notices she has a different perspective on childhood blindness because of her own vision loss.

“When I talk to other parents of children with vision challenges, they are devastated,” Lisa said. “But for us it was a choice to adopt a child who was blind. To me, blindness is another way of being in the world. You might need to learn what that way is, but it still is just another way.”

Despite her challenges, Ana Reshma has an excellent memory, is upbeat and positive, and loves Indian food and music. Because she came to the U.S. at age 5, she has more memories of India than Anjali does.

Lisa and Gordon are now mentoring a family of refugees from Afghanistan who have a 17-month-old daughter who is blind.

“I told them that the United States is one of the best places to live if your daughter is going to live the life of a blind individual,” Lisa said. “Our orientation to blindness in the U.S. still needs a lot of work, but there’s a real-life opportunity to be independent. You can forge a path here.”

As a family that embraces its varying ethnic identities, they have leaned into their home’s nickname of the International House of Light. They have created themed rooms, including the Bali Room, the Outback Room and the L’il Buddha Hut, to represent the diverse identities of their international students and their own cultures. Whenever they take a family portrait, their current international student is photographed with them.

“Gordon and I see our house as a place where young women of all backgrounds can be fully supported in order to live out their dreams,” Lisa said.