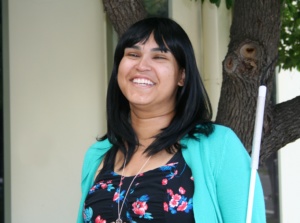 “What can a blind person do?” That was 21-year-old Liz Campos’ response when her mother insisted she call Society for the Blind to ask about volunteer opportunities. It turns out the answer is: Change people’s lives.

Liz started to go blind when she was 14 years old due to a rare autoimmune disorder that causes organ inflammation. The disorder was predominantly in her eyes, but she also had inflammation in her lungs, as well as arthritis and chronic pancreatitis. By the time she entered college, she worked hard to hide her vision loss from friends.

When Liz first called Society for the Blind to volunteer, she said, “I’m blind, so there’s nothing I can do except speak Spanish. I don’t know if you need any Spanish interpreters – I don’t know why you would.”

To her surprise, Liz agreed to become an interpreter for Society for the Blind’s Senior IMPACT Project participants who spoke Spanish.

“It turns out the whole trajectory of my life changed that day,” Liz said. “I met people here who were getting married, having babies, getting their hair and makeup done, going on vacation – all things I thought were out of my reach. I thought I had to live a drab, dreary existence.”

She traded in her folding cane that she used to hide her blindness and began using a straight cane. She continued to volunteer whenever there was an opportunity, feeling useful for the first time since she lost her vision. When she was offered a position as a rehabilitation instructor nine years ago, she accepted it and has never looked back. In her tenure at Society for the Blind, Liz has been promoted from rehabilitation instructor to mobility instructor and created a support group for Spanish speaking seniors.

“I grew up here and learned to love myself here,” Liz said. “I learned that I’m more than vision, I’m a whole person.”

When she first started at Society for the Blind, Liz had usable vision, and her biggest fear was what would happen if she lost all of her eyesight – would she be able to teach? Because of her autoimmune disorder, Liz was spending a lot of time and energy with treatments, surgeries, doctor visits and medications – all to try to keep her eyesight, which still was not great.

So she became certified as an orientation and mobility instructor through Louisiana Center for the Blind.

“This was my graduate school of blindness, and I’m glad I did it, because when I lost my remaining vision, my life didn’t stop,” Liz said. “Now there’s no doubt in my mind that I’m good at what I do because that’s who I am. That is my job and purpose and I do it to the best of my ability.”

Eventually Liz told her doctors that she had learned to live without her vision, and keeping it was not her main concern. They looked at her like she was out of her mind, but it’s a decision she stands by to this day. She also had bouts of severe pancreatitis from her illness, which landed her in the hospital every three months at one point. In April 2018, she found herself in the hospital battling for her life.

“I realize now that because of that tenacity, I have a greater purpose in my life than myself,” Liz said. “Coming back to work has always been that driving force. I can’t lie down and die – people need me. It keeps me doing what I’m doing.”

Now at age 33, Liz wears bold colors and no longer feels like she has to apologize for being blind – or speaking Spanish or being 6 feet tall. She credits Society for the Blind for her transformation, as well as her mother.

“For the longest time, my mother never cried in front of me,” Liz said. “She just said I needed to learn to be independent and would be okay. Then I realized she did a lot of crying on her own. The more I do for myself, the more I see what a great mother she has been for me.”

Liz lives with her mother, sister and grandmother, is surrounded by her family from Nicaragua and couldn’t be happier.

“I wake up every day thinking: Hello, world! I’m here, let’s see what you’ve got for me today,” Liz said.