Becoming the Artisan of a Joyful Life

Dan O’Connor quotes Aristotle when asked how he maintains an impressive sense of humor despite the tremendous amount of loss he has experienced in his life: “Comedy equals tragedy plus time.” 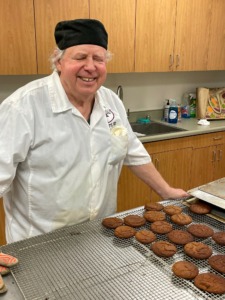 Dan O’Connor poses with a tray of freshly baked cookies in the SIP training kitchen.

Born premature in 1950, Dan was given too much oxygen in his incubator and lost most of his vision as an infant, as well as much of his hearing. As he continued to lose even more vision throughout his childhood, he also lost his father at age 2 and his stepfather at age 7. He was raised in a rough neighborhood in Philadelphia by his mother who had to struggle to raise three kids. He describes himself as a child with little confidence who was chased by other kids. But his humor saved him on more than one occasion.

“One day I was being chased by a bunch of teenagers, and I ran down an alley and straight into a black iron pole. I thought sure they had me, but instead the leader ran up shocked that I wasn’t crying and left me alone after that. So now I tell people, if you’re being chased, find something to run into,” Dan says laughing.

By age 17, he began working with the Department of Rehabilitation to learn independent living skills and began in the kitchen. He already knew how to bake, so he would bake cookies and cakes for his instructor to take home, but he still did not know what he wanted to do for a living. He spent most of his 20s trying out different vocations and instantly apologizing to people for his vision that made him feel unmanly and awkward. At age 33, he had an epiphany while studying rehabilitative counseling at San Francisco State University.

“I realized I was an artisan and wanted to work with my hands, and never mind the fact that I couldn’t see or hear,” Dan said. “It freed up a lot of emotional energy because it felt so true to me. I walked into a high-end restaurant in San Rafael that needed a bread maker. When they asked if I had professional experience, I lied and said yes. That was the beginning of my real life, doing something I loved.”

Over the years, he developed a great reputation in the baking world, working with breadmaking starters, brick ovens, wood burning stoves and more. He even baked his niece’s three-tiered wedding cake, adding humorously that he used edible flowers since he could not see to decorate. Eventually he became the head baker at Enchanted Hills Camp and Retreat in the Napa area, a summer camp for people with vision loss. There, he began teaching students how to work in an industrial kitchen.

As his baking and teaching skills flourished, so did his confidence and sense of humor.

“One time I was baking at a café when a burly construction guy came in,” Dan said. “He said to me, ‘Hey, what are you looking at?’ and I was brave enough to joke, ‘not much.’ The guy thought it was hilarious. I wouldn’t have been able to do that in my 20s.”

Then in 1999, he experienced loss again – a good friend died of cancer the same year his mother died. He decided it was time to try something new. He became a massage therapist.

“It was a big breakthrough for me to realize that I could work with my hands in a new way and earn a better living,” Dan said. “I used to joke: Before I kneaded dough, and now I need dough.”

He married the love of his life, who lives in Indiana to care for a family member, and he received a cochlear implant to improve his hearing.

When the pandemic hit, Dan’s massage therapy practice began to wind down, and he started to experience another decline in vision. At the same time, he lost his beloved guide dog. He was living in Lake County and decided to retire and seek more blindness skills training in Sacramento as he waited for a new guide dog. He moved in with a friend in East Sacramento and found Society for the Blind.

He joined the next Senior IMPACT Project retreat and has stayed in touch with many of the staff and students ever since, always finding new ways to help out, whether offering advice on Coffee and Connect calls, serving as a senior mentor or working in the kitchen. Through Society for the Blind, he has baked 150 brownies for blind marathon runners and taught classes of students how to properly chop vegetables.

This week, he baked 200 Spice o’ Life cookies for the Senior IMPACT Project’s holiday party celebrating the program’s 20th anniversary. He baked the cookies in Society for the Blind’s teaching kitchen, showing staff how to scoop the dough and more. He even brought his fancy cookie sheets from France.

“I love helping Society,” Dan said. “I feel like I’m doing it for friends, not as some charity project. I have really good friends there, and I’m really happy to be plugged in. I feel close with the staff and students, and each time I’m asked to help I feel more involved.”

Dan feels especially connected with the Senior IMPACT Project because previous groups he worked with only provided skills to people with vision loss who were of working age. He appreciates that Society for the Blind has been helping seniors stay independent for 20 years, and he likes seeing the difference the program makes.

“I get to see the positive responses of the students,” Dan said. “You don’t get that in a lot of situations. You can hear stories but seeing growth and change happening is something else.”

Dan said his biggest discovery is not that he knows a lot about cooking – it’s that he has found a new level of confidence through teaching in the Society for the Blind kitchen.

“That’s a major gift for someone who used to have no confidence and be filled with self-doubt,” Dan said. “That confidence is a big gift that I discovered through my involvement with Society for the Blind.”